His music ushered in the Swing Era.

Pioneered integrated bands in the 1930’s.

His band was the first jazz band to play Carnegie Hall.

Elected to All-Time Jazz Hall of Fame by Down Beat Magazine in 1957.

Presented with a Kennedy Center Award in 1982.

Lifetime Achievement Award from the National Academy of Recording Arts and Sciences in 1986.

Benjamin David Goodman grew up in a tough Chicago ghetto. His father took Benny and two brothers to a local synagogue, where they received musical instruments and lessons. Benny later studied with Franz Shoepp, a clarinetist in the Chicago Symphony, which undoubtedly accounts for his love of classical music.

Benny Goodman made history at the Palomar Ballroom in Los Angeles on August 21, 1935, when the crowd of jumping, cheering youngsters surrounded the bandstand during a swinging arrangement of Sugar Foot Stomp — and the Swing Era was born! History was made again in March, 1937 when more than 21,000 people jammed their way into the New York Paramount Theater to bounce in their seats and dance in the aisles to the Benny Goodman Band. And his 1938 Carnegie Hall Jazz Concert has earned an honored place in America’s musical folklore.

Less known is that the Benny Goodman Quartet, featuring Gene Krupa on drums, Teddy Wilson on piano, and vibraphonist Lionel Hampton, made the first dent in the color barrier that had until then kept bands all white or all black. Hampton has said that “the Benny Goodman Quartet was the forerunner of getting Jackie Robinson into baseball.”

Goodman was equally at home playing Mozart with the Boston Symphony or jamming at Harlem’s Savoy Ballroom. Bartok dedicated his clarinet trio Contrasts to Benny Goodman in 1938; later Goodman commissioned Aaron Copeland’s Concerto for Clarinet and String Orchestra in 1947, and Morton Gould’s Derivations for Clarinet and Band in 1955. Benny Goodman was also a composer, having co-written standards such as Stompin’ at the Savoy and Swingtime in the Rockies.

Benny Goodman was elected to the faculties of the Juilliard School of Music and Boston University. In 1962, when “The King of Swing” made a successful tour of the Soviet Union, one newspaper reporter quipped that “Khrushchev would trade three Sputniks for a Russian Benny Goodman!” The Big Broadcast of 1937 was the first of a long list of movies in which Goodman appeared, and, of course, he supplied all of the clarinet solos for the 1956 hit The Benny Goodman Story, starring Steve Allen. Anyone who was lucky enough to see Benny Goodman in person, listen to him on the radio, or dance to his records, knows why he was called “America’s Number One Musician” by musicologist Hal Davis.

1987 Grammy Award for “And The Angels Sing” (1939), Benny Goodman and Orchestra, Martha Tilton and Ziggy Elman. 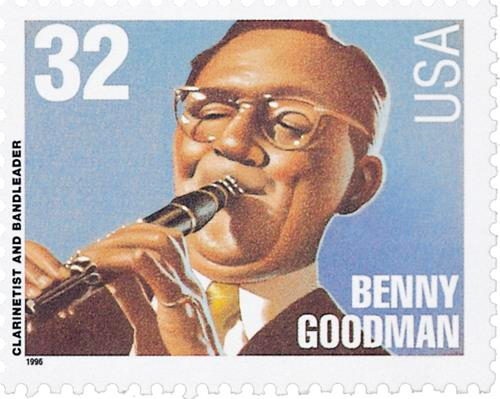